There is a debate underway about what the right programming model for Data Engineering is. There are three approaches - Python, SQL++, and Visual=Code. The Visual=Code is a new approach that Prophecy is working on to address the challenges we are seeing in the field, but there is no consensus on the right approach.

In this blog, we'll articulate the essential complexity of operations we see in Data Engineering, and what each approach is best suited for. By the end of this blog, you will have a structured framework to articulate what approach is best for your team (where you might already start with an implicit understanding of the concepts). The following articulates the various groups of users and operations that we commonly see with our customers. 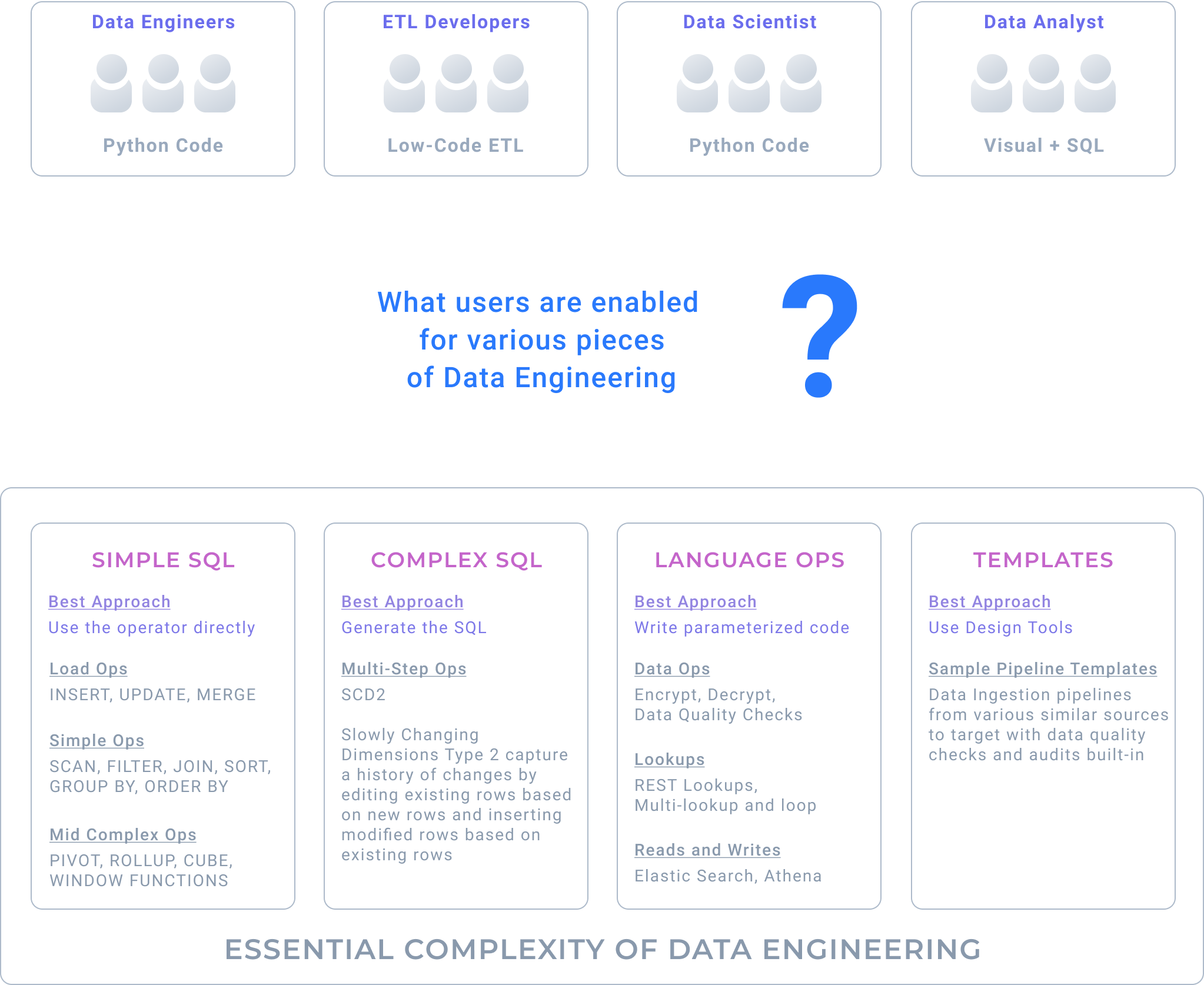 SQL is a good solution that everyone can use - but there are many operations that are common in data engineering but are not covered by pure SQL. Also, as complexity increases SQL is harder and harder to understand and maintain.

Everyone is enabled with SQL, but only a subset of data engineering operations are covered 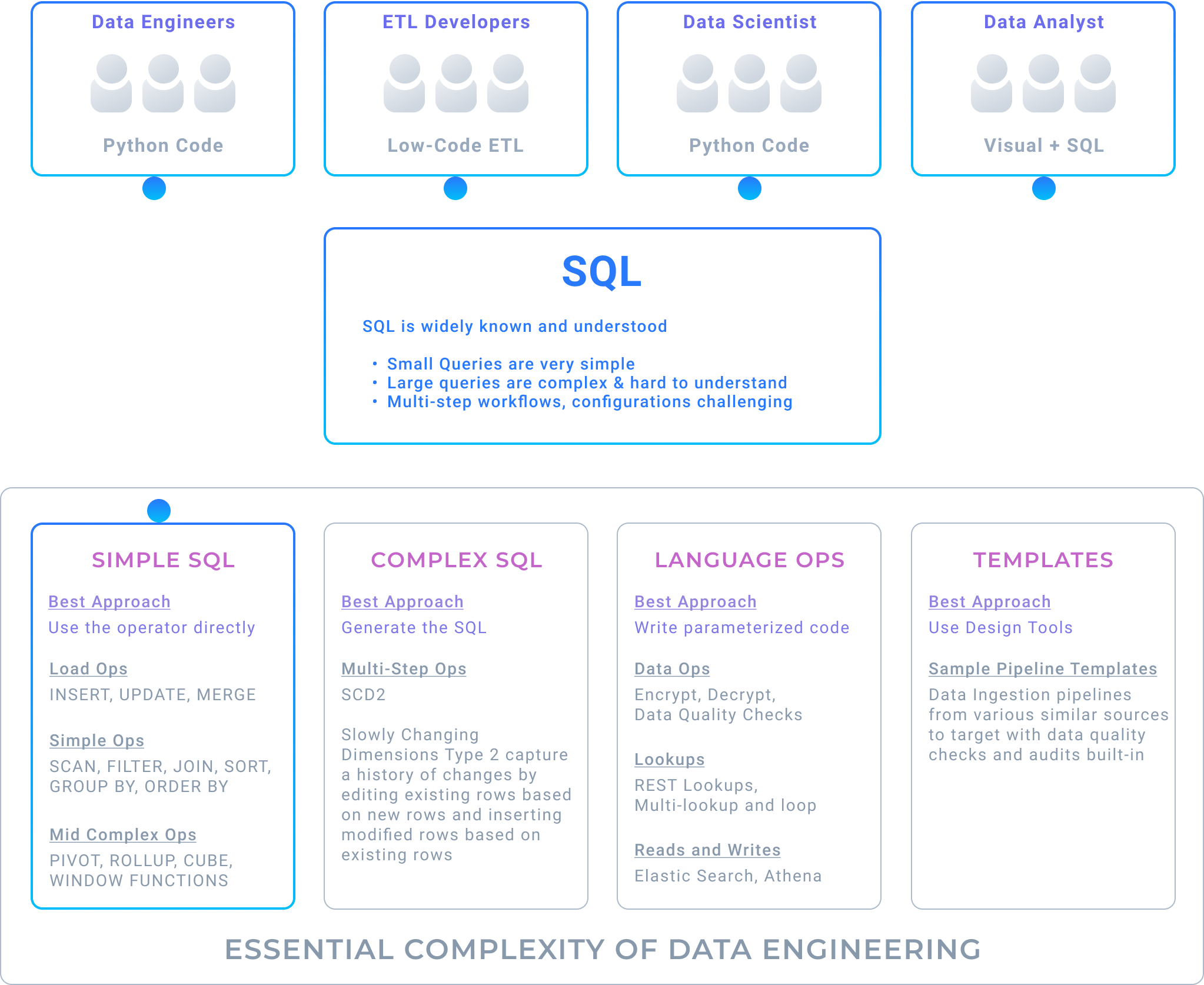 SQL starts to get complex quite fast. There are CTAS, Table Functions, Correlated Subqueries - but let's start with an operation that is quite common - a standard SCD2 merge:

SCD2 merge is a slowly changing dimension merge where the operational database has a field such as an address that changes infrequently, so in the analytical database, you keep of history of various addresses and the dates (from-date and to-date) capturing the period when this entry was active, along with flags to mark the first and last row in a chain. This can be the same for analytics on how long a home delivery order was in ordered, or en-route.

Data Before - with effective dates and flags

Merged data - with updates to new and existing rows

Following is the example code for it. This is clearly SQL that should never be hand-written. This example uses the Dataframe API but can be written as a SQL string. It shows an example where SQL is too low an abstraction. 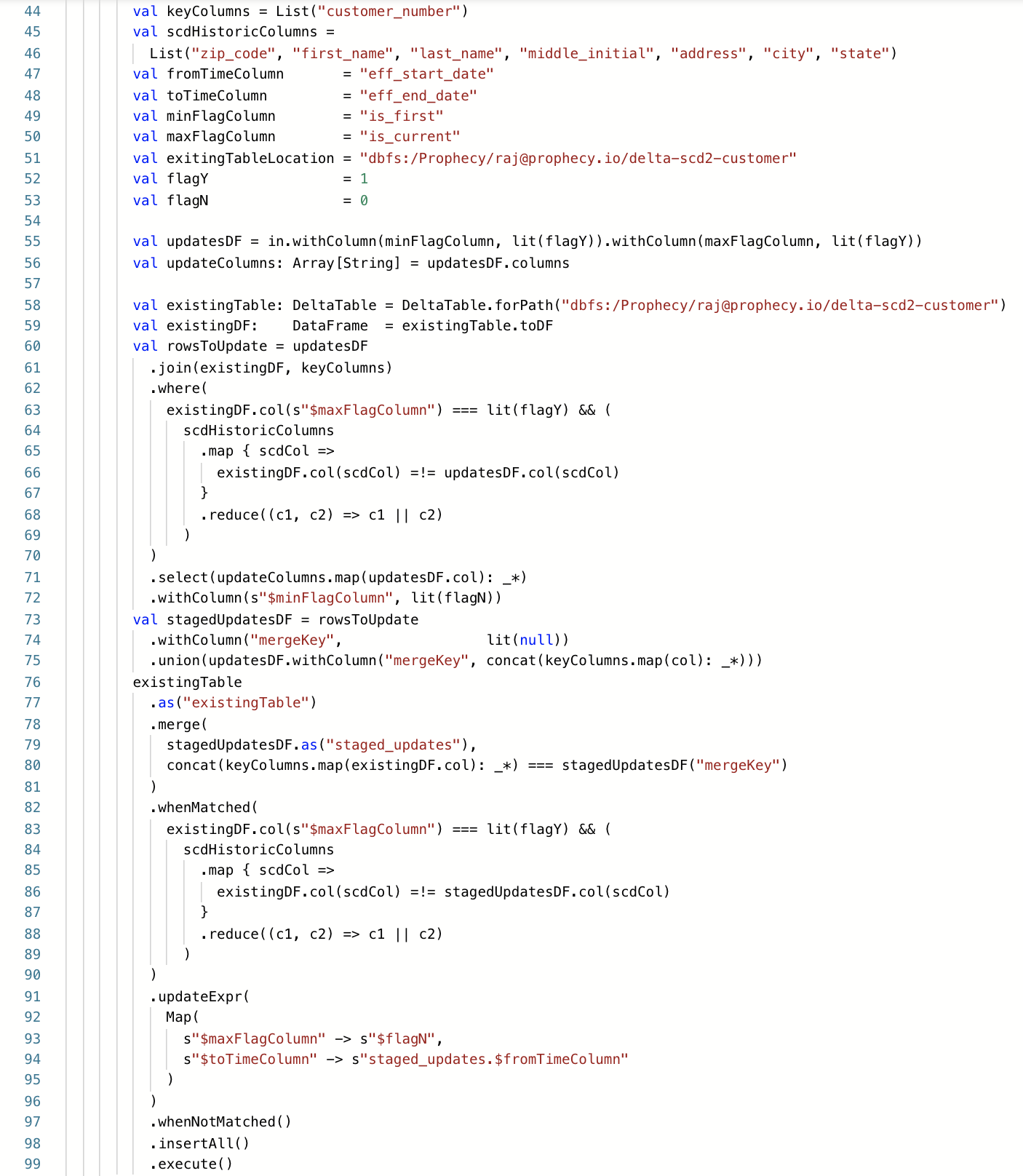 While consensus view is that these operations should be generated, there are multiple ways to generate  - code generators, macros and functions. The SQL++ approach of DBT gives some basic constructs (macros) to try to handle these operations (datespine, snapshots for scd2). DBT also brings software engineering practices to SQL and is being appreciated by the users for this. 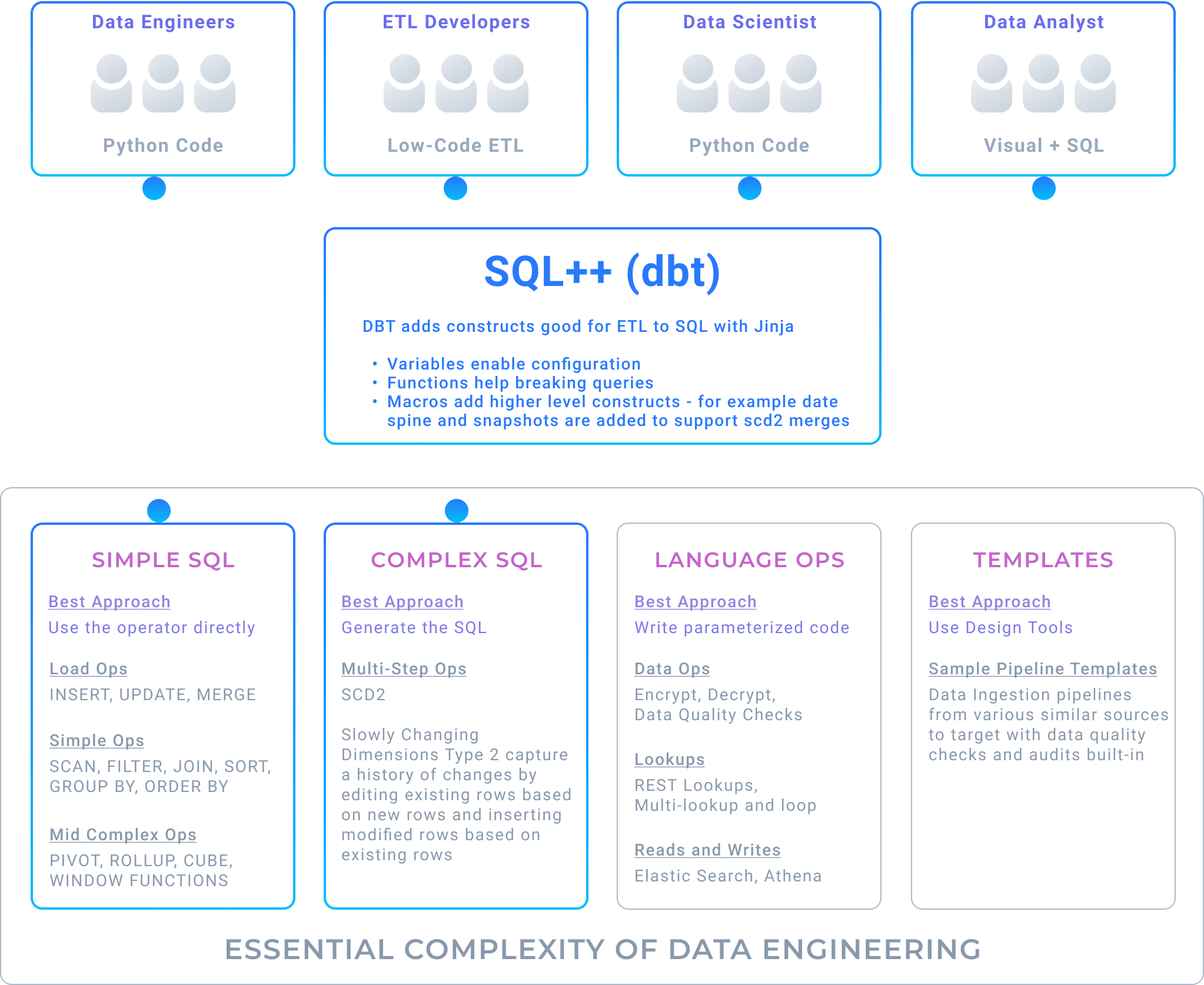 Now, there are many operations in Data Engineering for which SQL is not the right abstraction and you must use a programming language instead. There are a few use cases here. Our customers need to perform operations that must be performed per row and across rows. Here are some example operations

SQL has always accepted that it is not the right paradigm for these operations and provides numerous mechanisms to call non-SQL code such as User Defined Functions, User Defined Aggregate Functions, and Table Functions which support the full spectrum of use cases from most granular scope calling outside code per row - to passing the entire table out to code and accepting a new table back in.

Writing code in Python can capture these use cases, but only a small subset of users in an organization can produce high quality and standardized code and the productivity is always low. 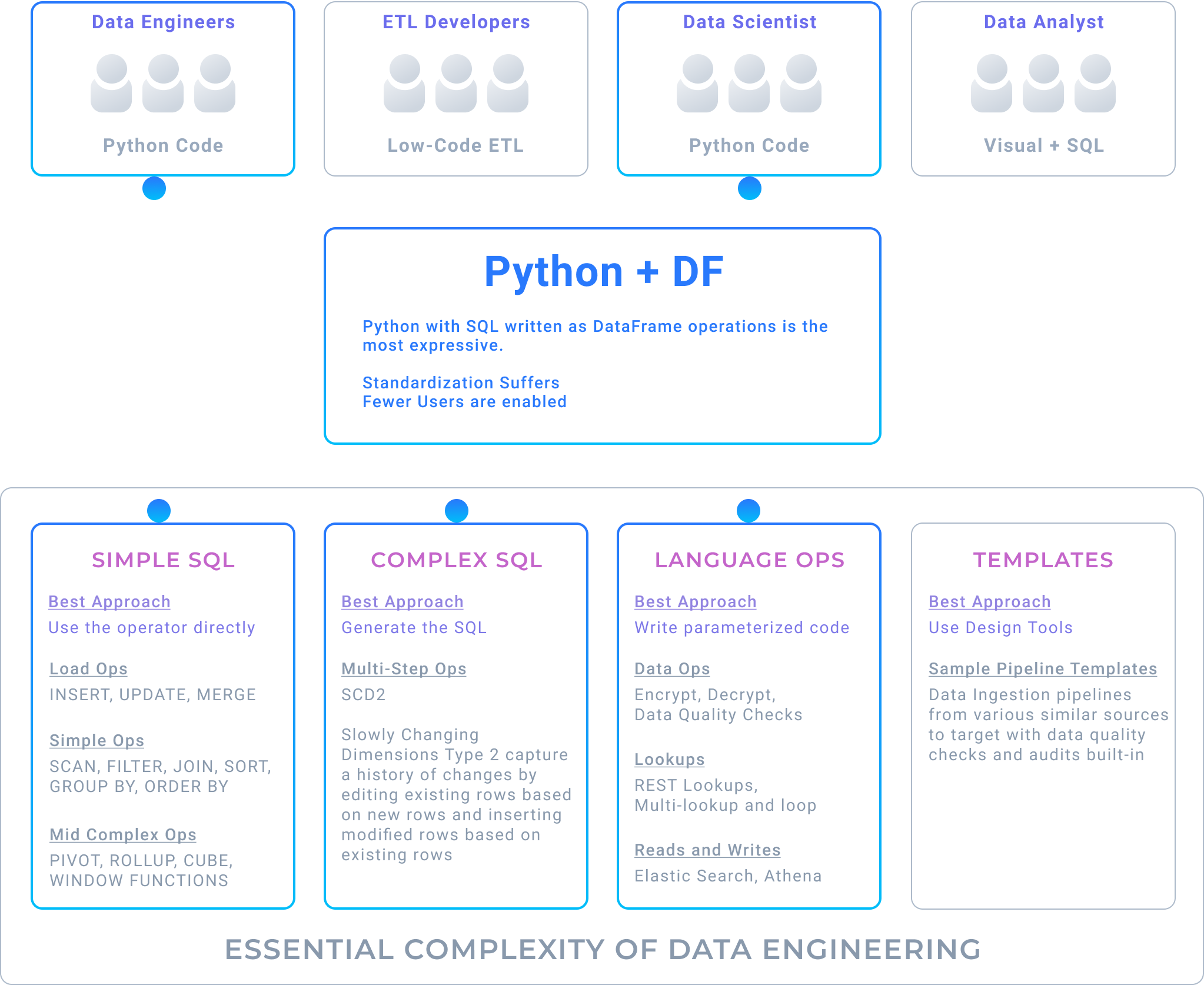 Templates can encode common series of patterns - standardizing practices for various parts of the ecosystem. We've seen standard ingestion templates for pipelines from multiple similar source systems that include best practices such as auditing that correct numbers of rows were output that is required in financial environments.

Enabling All Users with All Operations!

As you can see with the previous approaches - either many users are left out, or many use cases are, greatly limiting what can be achieved.
‍
At Prophecy we have been thinking from scratch what might be the best approach to handle all of the data engineering operations and enable all users at the same time. Here is our approach:

Use Gems: Visual with SQL Expressions

All users must be enabled to use all kinds of transforms and be enabled to build any kind of data engineering workflows, so we've created an interface where all the usage is in SQL - but your operations generate a mix of SQL and non-SQL code depending on the operations.

In the team, you can have a few Gem Builders (or you can ask Prophecy for it). You can write code that you want generated for any particular operation by writing sample code and specifying what information the user of these gems should fill out. As your users develop gems - high quality code is being generated on git. Here is a quick preview of Gem Builder:

Visual=Code: Putting it all together

Now, when you put these two personas together - the Gem Builders and the Gem Users, you have your entire team enabled to perform all the operations you need. Also, all users can build these data pipelines and everyone is developing high quality code on Git. 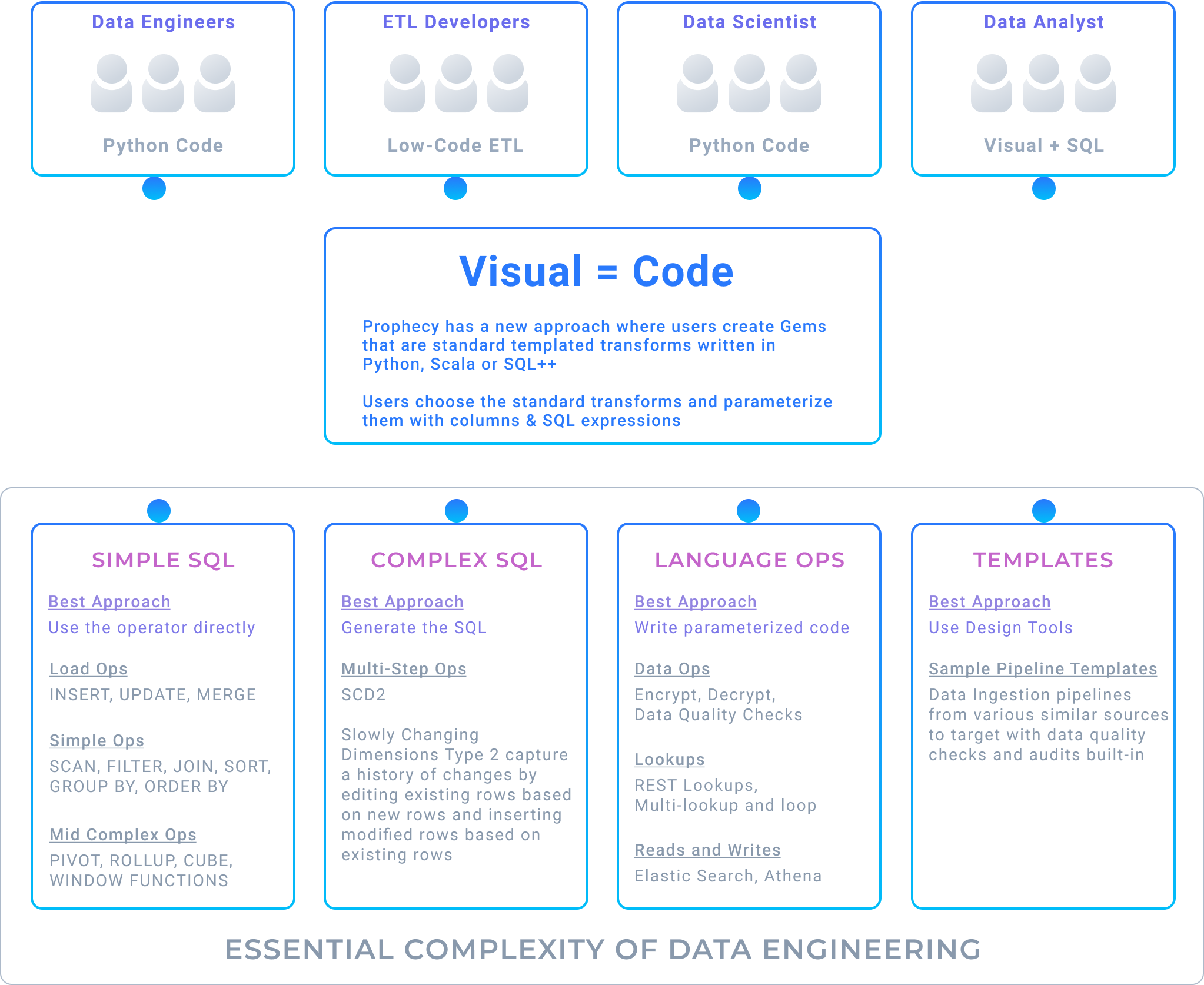 There are multiple approaches to Data Engineering, and as different startups are looking at the problem, they're coming up with the approaches they think are best suited to solve them, toiling away to make the lives of Data Engineers better.

We have shared here the framework that we used to figure out the best approach to enable most users with all the common elements we find in Data Engineering. We look forward to tremendous innovation over the next 3-5 years to make Data Engineering more accessible and reducing the toil required for it.

Prophecy is available as a SaaS product where you can add your Databricks credentials and start using it with Databricks. You can use an Enterprise Trial with Prophecy's Databricks account for a couple of weeks to kick the tires with examples. Or you can do a POC where we will install Prophecy in your network (VPC or on-prem) on kubernetes. Sign up for you account now: